Local Shire Councillor Dave Tapley came up to me at a function yesterday to congratulate me on my books. He said he read The Man Who Didn't Like People in two sittings and went straight on to A New Era For Manny Youngman, which he thought was the better of the two although he liked them both. I have to admit I like it when people like my stuff. Makes me feel that self-publishing has been worthwhile after going all those years of writing without anyone reading what I had written.
Meanwhile both places in town which stock my books report sales and I should soon be getting the report on my first month of E-book and hard copy sales through Ingram Spark.
With all that and the progress I am making on The Man Who Voted For Australia I'm feeling pretty good about my writing at present.
Posted by Mike Murphy at 20:16 No comments:

I've got a lot of darlings to kill in both the novels I have been working on. It is tempting at times to create characters to highlight one aspect of a story but then have to do something with them, so they take on a life of their own, cluttering up the plot and distracting from the main story line. Several of the possible suspects in Murder For A Grandmother  and an MP and a some of the hero's staff in The Man Who Voted For Australia are going to disappear. It is going to mean a bit of work but I think both novels are going to be a lot better for it. On an editor's advice I am also going to rename Murder For A Grandmother. It is now The Grey Nomad Detectives' First Case. Other books will be The Grey Nomad Detectives' Second Case etc. The grey nomad's idea is the one which will attract attention to the books.
Posted by Mike Murphy at 18:05 No comments:

I'll be attending the Rockingham Writers Convention this weekend. Sessions I have booked in for include Presentation Skills for Authors, Marketing and Promotion and Crime Writing and there will be a panel discussion on independent v traditional publishing. Representatives of Fremantle Press, Escape Publishing and Wild Eyes Press and literary agent Jane Novak will be hearing pitch sessions but I have nothing to pitch this time round. This convention is unlike others because it aims at writers and not readers. Among the authors taking part will be David Whish-Wilson, Natasha Lester, Shona Husk, Claire Boston, Teena Raffa Mulligan, Tess Woods, Kate Cuthbert, Julie Lawrinson, Deb Fitzpatrick and Katy Dell, none of whom are million sellers but all with several books published and a growing readership.
Posted by Mike Murphy at 16:49 No comments:

Worked on Chapter 2 of my Australia Day novel yesterday. Still not sure of the exact title but that can wait until the draft is finished. In Chapter 2 we learn about Jeff's family and he discovers that one of his daughters is for changing Australia Day and the other against. Both want him to support their cause but he is not very interested either way. Instead he consults his son about the proposition Matt has put to him and finds he is very much in favour. I spent quite a bit of time on the revision of this chapter fleshing out the family atmosphere, bringing in the grandchildren and having Jeff react with them, the idea being to give him a more human face as well as establish the family dynamics.
Posted by Mike Murphy at 18:50 No comments:

Spent the morning revising the first chapter of A Vote For Australia and felt myself back in the groove where I want to be. Some of the reading I have been doing in my writing hiatus had given me some insights I think have helped the first chapter, particularly making the opening work better. I also added more description of the scene and the characters on the basis that some of my previous writing has been a little too spare. If on future reads it looks like too much padding I can take it out again but for the moment it seems to be giving the scene more substance.
The plan is to concentrate entirely on this novel. I've put Murder For A Grandmother and the Grey Nomads to one side as being too big a project to be undertaking right now and not in keeping with the author brand I am developing with A New Era For Manny Youngman and The Man Who Didn't Like People.
Posted by Mike Murphy at 07:46 No comments:

It is always good to be appreciated by another author and I was delighted when Sarah Drummond dropped by and said how much she had enjoyed The Man Who Didn't Like People and found it fast-paced and un-putdownable. We had a chat about how much description needs to go into a novel and agreed we like to keep on-story without too much padding. Sarah's books, if you haven't read them are Salt Story and Sound, both set along the south coast here where we live. She is currently living about 30 km west of me in an even more remote spot at Broke Inlet and is working on a novel based on the fascinating characters who lived there half a century ago.
Check her out at sarahdrummond.org or her blog at thewinedarksea@blogspot.com. 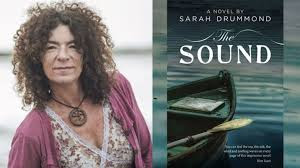 The sales of The Man Who Didn't Like People have exceeded the cost of printing, which is more than satisfactory. The launch at the Petrichor Gallery was a big success and generated the bulk of the early sales including copies of A New Era For Manny Youngman as well as the new novel. Feedback from readers has all been positive.
I have received the MS assessment from a professional editor on Murder For A Grandmother and will be working through that in more detail when I get back into a writing routine this week. My initial reaction is that I don't agree with some of her comments, but I will think about them some more before making any decisions.
I am going to make the attempt to work on two books at once. The first of the Grey Nomad Detectives series is mainly revision whereas Voting For Australia is only partially written and will need a different approach.
For the moment I have filed away my notes on a possible Broome novel but I will be reading David Warner's Before The Break which is a crime story set in Broome, to see how he deals with the culture of the town, which I found very different and challenging for a writer. I can see the town and its culture playing an important part in the story, but if it is not done correctly, the locals up there could be very unhappy.

While I took a week's holiday in the sun in Broome I got in some reading in genres that I do not usually read. One was "Hallam Square" by an old friend, Anna Jacobs, who writes historical family sagas. I was impressed by the amount of descriptive detail she put in about what characters wore, their hair styles, facial features etc, and the fact that it made them come alive. Something I could do better I think. Also Jeffery Archer's "Cometh The Hour" where I found more descriptive detail delineating a big cast of characters. Expect to see more in my future books.
Posted by Mike Murphy at 21:23 No comments:

My most recent publication

Have you read about Manny?

A man with unconventional views on male/female relations is confronted with a teenage daughter he did not know he had.

Anna Jacobs
A mentor in my early writing days and still one of my favourite authors. Her sagas about family life in Lancashire are among my favourites but she is a prolific writer and it's all good.
Michael Robotham
Michael urged me to keep writing when I was in a depressed period after another publisher's knock-back. He is basically why I kept writing and turned to self-publishing. I've read all his books and I'm always waiting eagerly for the next one.
Dave Warner
I only recently discovered Dave as a writer after having had his Dave Warner and The Suburbs album since it was on vinyl. It's interesting having another writer who sets his stories in Western Australia.
Dick Francis
I've read all his books at least twice and sometime more often. He's the writer I always return to when I need to feel totally in my comfort zone. Good stories, tight plots, easy writing style. I'd love to know if it really was his wife Mary who wrote them. His son Nigel is doing a great job of keeping the family business going.
Leslie Thomas
Ever since Virgin Soldiers I've been hooked on Leslie Thomas and his Dangerous Davies series are among my all-time favourites.

I am because I write

I come across a lot of people who would like to be writers and I often wonder why. For me there has been no question. Since a very young age I have been a writer. Certainly not a famous or even successful one but while other people were doctors or teachers or sportspeople, the thing I did best and was most comfortable doing was writing. For some reason I had a natural flair for it and that raw talent was honed when I became a journalist and learned that what bubbled out of my head was not what was needed. I had to to be able to write to order. One of my earliest lessons came from Bob Duffield, a reporter who took the story of the closure of Perth's Roe Street brothels and wrote different versions of it for convervative, sensationalist, religious and sociological publications. I learned that writing was a craft to be learned, and I have spent many years learning not only the craft of writing, but of story-telling, which is an art in itself. Whether it's a poem, a short story, a novel, my family history, one of my blogs or web sites, I will always be writing something. It's simply who I am and what I do.